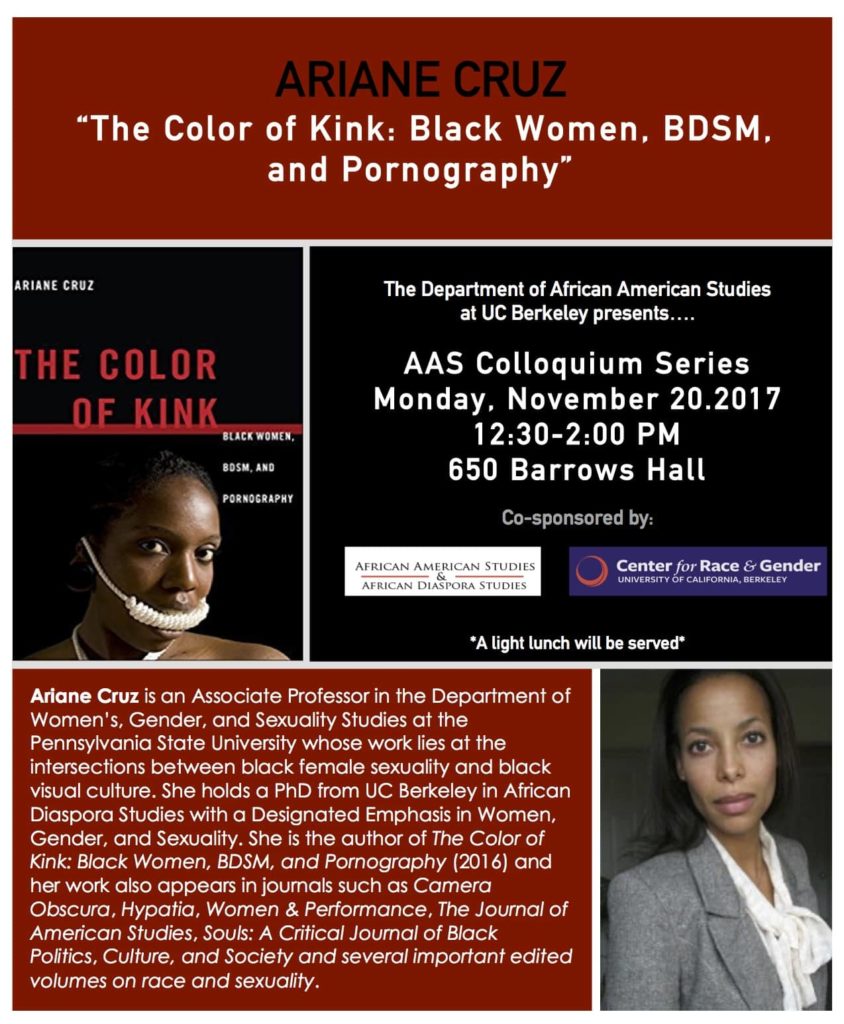 Ariane Cruz is an Associate Professor in the Department of Women’s, Gender, and Sexuality Studies at the Pennsylvania State University whose work lies at the intersections between black female sexuality and black visual culture. She holds a PhD from UC Berkeley in African Diaspora Studies with a Designated Emphasis in Women, Gender, and Sexuality. She is the author of The Color of Kink: Black Women, BDSM, and Pornography (2016) and her work also appears in journals such as Camera Obscura, Hypatia, Women & Performance, The Journal of American Studies, Souls: A Critical Journal of Black Politics, Culture, and Society and several important edited volumes on race and sexuality.

*A light lunch will be served*

For a Real Racial Democracy:
Brazil’s Black Movement and the Struggle for Education

Amilcar Pereira is an Associate Professor in the School of Education at the Federal University of Rio de Janeiro and is the author of Black World:  The Making of the Contemporary Black Movement in Brazil (1970-1995). His talk will highlight one of the most important aspects of the Brazilian black movement since the late nineteenth century: the struggle not only for access to educational institutions but also for curricula substantively inclusive of Africa and its Diaspora. In 1978, the Movimento Negro Unificado—MNU (Unified Black Movement) drafted its Carta de Princípios (Charter of Principles), which called for the reassessment of the role of blacks in Brazil’s history. Since 2001, when the adoption of quotas for Brazilians of African descent in universities became a frequent topic of the discussion in the media and within different sectors of society, debates about racial issues in Brazil have become very lively. President Lula’s signing Law 10,639 in January 2003 was a seminal event. It made the teaching of African and Afro-Brazilian histories and cultures mandatory throughout the Brazilian educational system, including both public and private schools. This significant development was primarily the result of efforts of the black movement, which had exposed the existence of racial discrimination and struggled for better conditions for African descendants in Brazil during the twentieth century.

Amilcar Pereira is an Associate Professor in the School of Education at the Universidade Federal do Rio de Janeiro (UFRJ – Federal University of Rio de Janeiro), where he teaches both Graduate and undergraduate courses about race relations and Afro-Brazilian history and culture. PhD in History, he is the author of the book “Black World:  The Making of the Contemporary Black Movement in Brazil (1970-1995” and co-editor of Histórias do Movimento Negro no Brasil (with Verena Alberti, 2007), Ensino de História e Culturas Afro-Brasileiras e Indígenas (with Ana Maria Monteiro, 2013), and Educação e Diversidade emDiferentes Contextos (with Warley da Costa, 2015), and recently was a Fulbright Visiting Scholar at the Institute of Latin American Studies (ILAS) of the Columbia University in New York (2015-16).